Wheelers locations in Nevada. Meeting the needs of the community. Not seeing the location you need? Please fill out our contact form and let us know the city you would like to rent from. We will contact you shortly and do our best to fulfill your needs! “Thank you, thank you! It was magical working with your team. Your satellite technology made the process seamless, very easy 21st century. You texted us where to pick up the van. We texted back pictures of license plate and other required info. Switching from texting to phone communication, you told us the hiding place of the keys. Minutes later off we went! The side entry van was extremely adequate for me and my power power wheel chair. Strapping me in was quick and efficient. Speaking with your knowledgeable staff was pleasant. Finalizing my billing was fair and simple. I definitely will be calling, again!”

“I have rented from this company in a few different states and have found them to be professional and that they provide a very necessary service. My wife is in a power wheelchair and it’s can be so frustrating to get her wheelchair around. But Wheelers has made it a lot easier. Their customer service is above what I’d have ever expected. If something goes wrong, they are right there trying to help fix whatever it is that has gone wrong. If I have more than one choice, I’d always rent from Wheelers.”

“This company is the best company I’ve ever dealt with. Their van was perfect for our needs. Making a reservation was super easy and they did everything exactly as they said. I will always call Wheelers first when I need to rent a wheelchair van.” 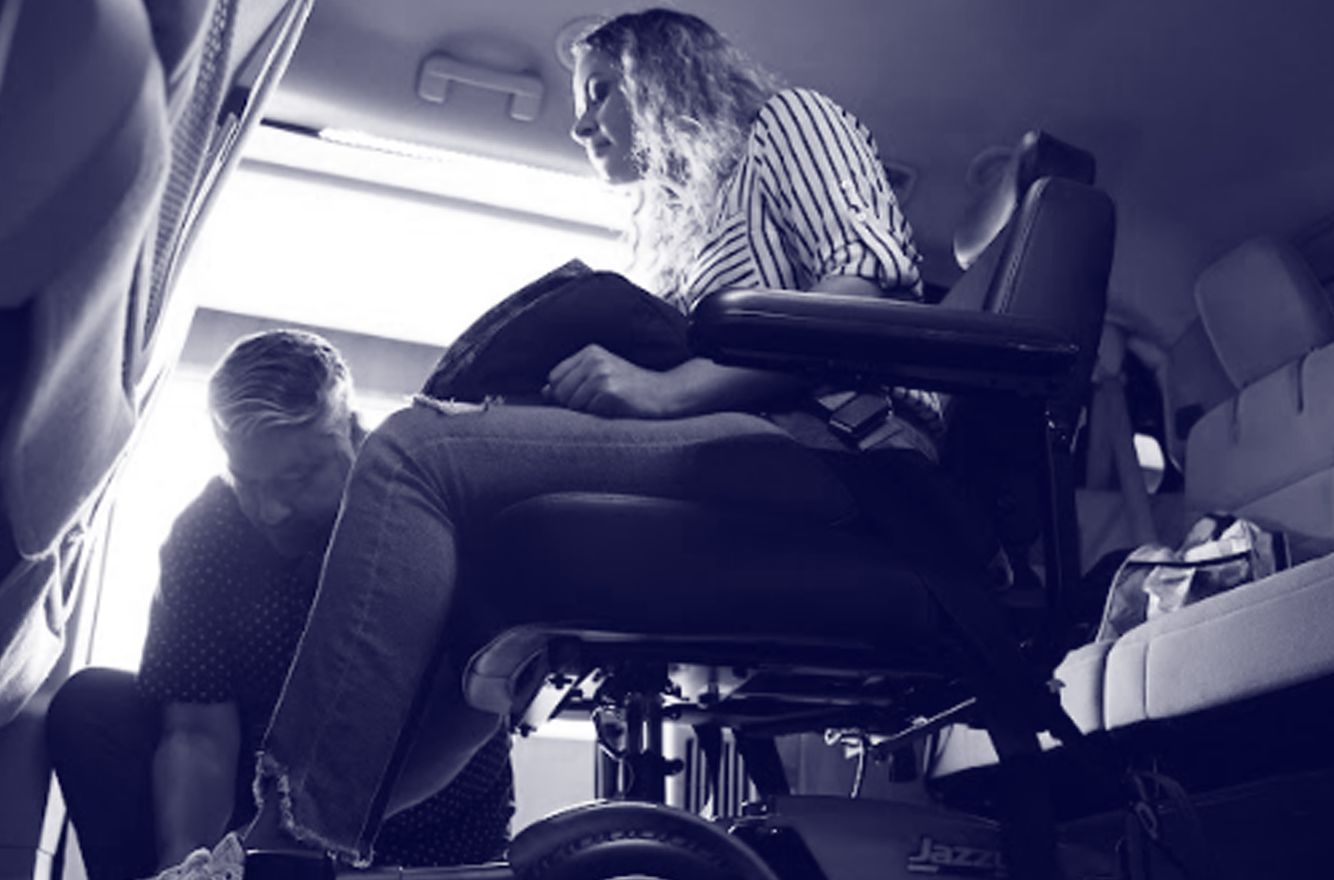 Nevada is situated in the western region of the United States, sharing its border with California, Oregon, Idaho, Arizona, and Utah. Nevada has a population of 3,104,614 people, making it the 32nd most populous state in the nation. Around three-quarters of the residents live in Clark County, making the state the 9th least densely populated in the nation. Clark County is home to the Las Vegas metropolitan area. Although Las Vegas is the largest city in the state, Carson City serves as the state’s capital city. Historically, the Paiute, Shoshone, and Washoe Native American Tribes inhabited the land for centuries before Spanish explorers arrived. The Spanish explorers named the land Nevada meaning “covered in snow” referring to the state’s snowy mountain tops. Nevada originally belonged to Mexico before The United States annexed the area in 1848 after the Mexican-American war. Nevada officially became the 36th state in 1864. Nevada’s economy is strongly tied to tourism with its many national parks and recreation areas as well as its many casinos and resorts. The state is served by Amtrak along Union Pacific’s original transcontinental rail line, however, Las Vegas has not had passenger train service since 1997. Greyhound lines do provide some bus service throughout the state, however, the primary mode of transportation is via personal vehicle along with its network of interstate, US highways, and county highways. The Las Vegas Strip is one of the most accessible tourist destinations that the state has to offer. Casino floors are easy to navigate and many of the machines, games, and tables are accessible by wheelchair users. New automated table games even eliminate the need for handling chips, as they allow bets to be placed from a digital display. Apart from gambling in casinos, the strip also offers many other attractions. The strip is lined with many attractions in the form of interesting architecture, beautiful structures, and public entertainment. Taking a self-guided tour up and down the strip is completely free and offers the chance to enjoy must-see things like the fountains of Bellagio, the Volcano at the Mirage, and the pyramid and sphinx at the Luxor Hotel & Casino. Lake Tahoe is the largest alpine lake in North America. It offers cobalt blue waters and sits atop the Sierra Nevada mountain range. There is a wheelchair-accessible boardwalk and nature trail that leads to a picnic area. There is also an accessible path that leads to one of the lake’s many sandy beaches. The Lake Tahoe national park offers two beach wheelchairs that visitors can use free of charge! The beach wheelchairs are given out on a first come first serve basis. If you are visiting from out of state, there is an entry fee to get into the park. Entry into the Lake Tahoe national park costs $12 per car for non-residents of Nevada but is well worth the price of admission. Like Las Vegas, Reno offers visitors plenty of casinos, entertainment, and resort options. The Sands Regency Casino is just a few blocks from downtown so you can get the full Reno experience. The Casino offers handicapped-accessible rooms that are large enough to accommodate power wheelchairs and features spacious bathrooms with roll-in showers and roll-under sinks. The Circus Circus resort in Reno is also an accessible option. This resort has easily accessible entrances and even rents mobility scooters for $35 per day. The North Tower allows ready access to the casino floor so you should try and book this tower, as the sky tower is much less easily navigated. If gambling isn’t your thing, Reno is also home to the Nevada Museum of Art which is the only American Alliance of Museums accredited art museum in the state of Nevada. All public areas of the museum are wheelchair accessible.

The Great Basin National Park offers stunning views of its ancient groves of bristlecone pines and Wheelers Peak, a 13,063-foot mountain in the Snake Mountain Range. Great Basin National park is one of the nation’s most secluded national parks so it is a perfect place to go for some piece and quiet. The park offers plenty of places for wheelchair-users to admire the beautiful natural surroundings. The most accessible way to experience the park is to take the 12-mile scenic drive up to Wheeler Peak. The visitor center offers a parking lot with handicap van spaces and enough room inside to navigate through interpretive exhibits. From the visitor center, you can access Wheeler Peak Scenic Drive which is a winding road that hugs the mountain. Motorists can drive to the top of the peak. Perhaps one of the most well-known attractions, the Hoover Dam is a must-see attraction. The Hoover Dam was constructed between the years 1931 and 1936 to control the Colorado River. Since the Colorado River forms the border between Nevada and Arizona, half of the dam is in each state. The dam’s two iconic clock towers, set on each end display the current time in both states. There are several disabled parking spots available and an elevator as well as paved pathways that lead from the ground parking level to the Hoover Dam promenade. The Hoover Dam also conducts multiple tours, however only the “Powerplant Tour” is wheelchair friendly. The Powerplant Tour lasts roughly 30 minutes and uses an elevator to showcase one of the impressive generators that the dam uses to supply energy to 1.3 million people. The Visitors’ Center features accessible bathrooms as well as an observation deck that offers a great view.

Wheelers Accessible Van Rentals are a pioneering handicap rental van company that offers safe, comfortable, and accessible transportation throughout the United States. Wheelers offers independent, accessible automobile rentals to Nevada with their pick-up and drop-off location in Las Vegas. To reserve an accessible full-size van or mini-van, all you need is to be at least 23 years of age, hold a valid US driver’s license, proof of insurance, and have a valid credit card. Wheeler’s fleet has many vehicle make and models to rent and they also offer a Rent2Buy program that allows customers to rent a chosen vehicle for a three-day trial period at a special low rate before deciding to purchase the vehicle. Get the most out of your trip to Nevada by making a reservation for a Wheeler’s Accessible Van and enjoy wherever it takes you, from the Vegas Strip, the top of Wheeler Peak, to the Hoover Dam.